How to Install ExpressVPN on Linux in 2022 — An Easy Guide


Installing new software on Linux can be pretty challenging. However, it’s worth the effort — the ExpressVPN Linux app provides you with more security and data privacy.

Our step-by-step guide explains how to set up ExpressVPN for Linux. You can install ExpressVPN on Ubuntu, Arch, Linux Mint, and other distros. There are several ways to do it.

Not all VPNs are compatible with Linux or work on this operating system reliably. That’s why ExpressVPN is my top choice for Linux. Besides robust security features, it quickly bypasses geoblocks and has blazing-fast speeds to access the content you need without interruptions. Plus, you can try ExpressVPN with confidence as it’s backed by a 30-day money-back guarantee.

Quick Guide: How to Install ExpressVPN on Linux in 3 Easy Steps

Why You Should Use ExpressVPN on Linux

Although Linux is quite secure, it’s not immune to online threats. It’s still possible to expose your sensitive information to hackers and have your privacy compromised. ExpressVPN’s Linux app protects your browsing activity even on unsecured public WiFi networks.

If you’re already using ExpressVPN, you most likely know that a VPN reroutes your traffic through a private server to encrypt your connection. It masks your real IP and replaces it with one from your chosen country. For example, a VPN can make it look like you’re in the US while in the UK. ExpressVPN also follows a strict no-logs policy, so your personal information can’t be shared with any third party. Plus, DNS leak protection prevents data exposure.

Besides, the ExpressVPN Linux client has an extensive server network for bypassing geoblocks. With servers across 94 countries, I easily accessed my Netflix US, BBC iPlayer, and HBO Max accounts when abroad. You can also watch your favorite shows buffer-free thanks to lightning-fast speeds. Plus, the VPN provides professional 24/7 live chat support to help if you get stuck.

Subscriptions start at $6.67/month. Luckily, ExpressVPN regularly offers generous discounts. When I subscribed to my 12-month plan, I got 49% off and 3 extra months for free. Thanks to a 30-day money-back guarantee, you can also try ExpressVPN without risk. Getting a refund is hassle-free if you’re not fully impressed with the service.

How to Install ExpressVPN on Linux

Setting up ExpressVPN on Linux is effortless with our simple guide. Just follow the steps below to install ExpressVPN for Linux distros within minutes.

The first and foremost step is downloading the installer. Make sure to subscribe first — choose the plan that suits you most. You can try ExpressVPN risk-free since it’s backed by a 30-day money-back guarantee. To get the installer, simply go to ExpressVPN’s Linux page. 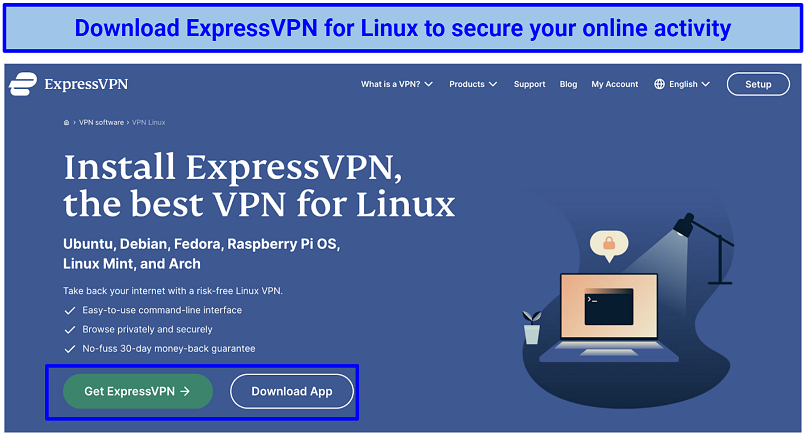 ExpressVPN has the following installer options to choose from:

Note: Debian and Mint users should select Ubuntu. CentOS users can select Fedora. You can find your architecture version by entering “-m” or “arch” in the Linux terminal. Most newer gen systems run a 64-bit OS.

Now that you have downloaded the installer on your device, there are only a few more steps required to install ExpressVPN. Go to the terminal and enter this command:

How to Install ExpressVPN on Linux Distros Using GUI

You can install ExpressVPN using the GUI (Graphical User Interface). Just right-click the downloaded installer. Choose Open with Other Application > Software Install > Select. The next steps include clicking the Install button, entering your password, and choosing Authenticate.

When the installation is complete, go to the terminal and run this command:

How to Install ExpressVPN on Linux Distros Using Command Line

Depending on the distribution you’re using, run one of the following commands.

Note: You have to type your user password to install the file. To install ExpressVPN on Arch Linux, enter “y” to proceed with the installation. Use Expressvpn Arch Linux by following the method below.

How to Install ExpressVPN on Linux Distros Using OpenVPN Client

It’s possible to set up ExpressVPN on Linux using the OpenVPN protocol. Find the Manual Config option in the left-hand menu on the ExpressVPN page. You should see your username, password, and a list of OpenVPN configuration files. 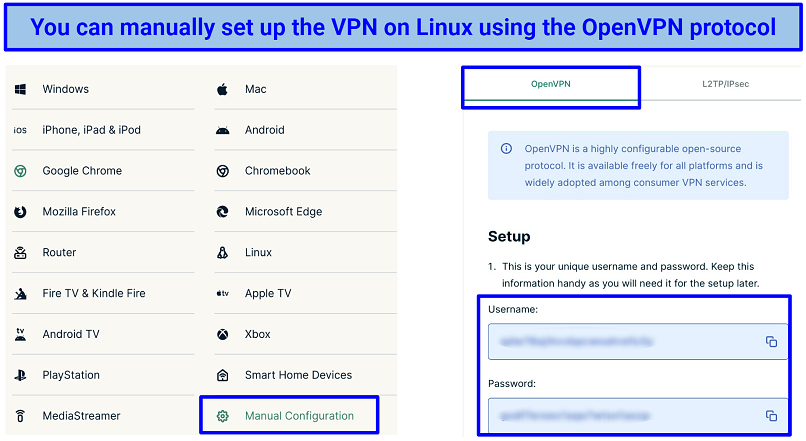 OpenVPN is one of the most widely used open-source protocols

According to your Linux distribution, enter the commands below:

Ubuntu / Mint
Enter the following command in the terminal window:

Debian
Enter the following command in the terminal window:

For Fedora / CentOS
Enter the following command in the terminal window:

It’s best not to close this terminal window to keep the VPN connection active. You can minimize it if you want.

How to Install ExpressVPN on Linux Distros Using A Browser Extension

You can set up a connection through ExpressVPN’s browser extension. However, it’s not a standalone option; you must use it with the ExpressVPN app.

The VPN supports Chrome and Firefox, and using the browser extension gives you easy access to the servers through GUI.

Once you have set up ExpressVPN and want to install the browser extension, just run the following commands:

A page in your browser should pop up — click the Get Extension button to complete the process.

Finally, you can activate the ExpressVPN app on your Linux distro. Just open a new terminal and run the following command: 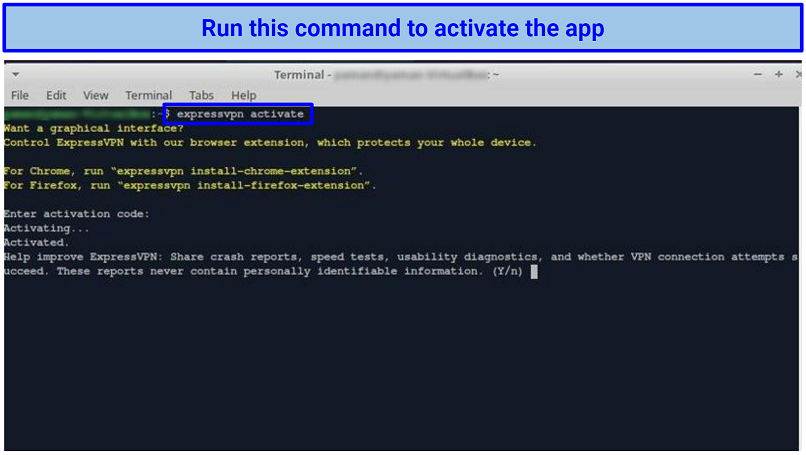 All you need to do now is enter your activation key and select “Y/n” for sharing anonymized diagnostic reports. Enter “Y” to accept or “n” to decline. If you choose yes, but want to opt out, enter the command:

How to Use ExpressVPN on Linux

Using ExpressVPN on Linux is a bit complex, but here’s how to use ExpressVPN optimally for your device. You can try ExpressVPN with confidence as it’s backed by a 30-day money-back guarantee.

Connect to an ExpressVPN Server

Go to the terminal and run this command:

Once you are successfully connected, you can see the “Connected to…” message written in green. You may also see a notification card on your screen stating that the VPN is connected. 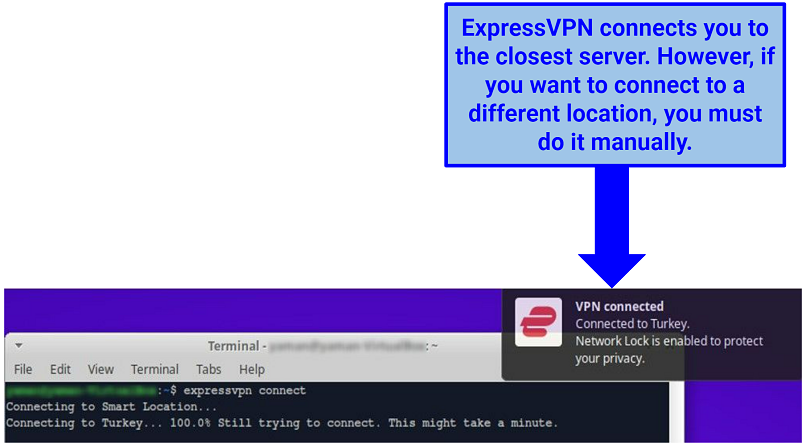 Note: ExpressVPN uses the Smart Location feature to select a server location while connecting for the first time. However, if you’ve used the service before, the VPN connects to the server location you were most recently connected to.

Disconnect from a VPN Server Location

To disconnect from a server location, run the following command:

ExpressVPN will disconnect from the server it’s connected to. You may also see a notification card stating that the VPN is disconnected.

To find the recommended locations to connect to, enter the following command: 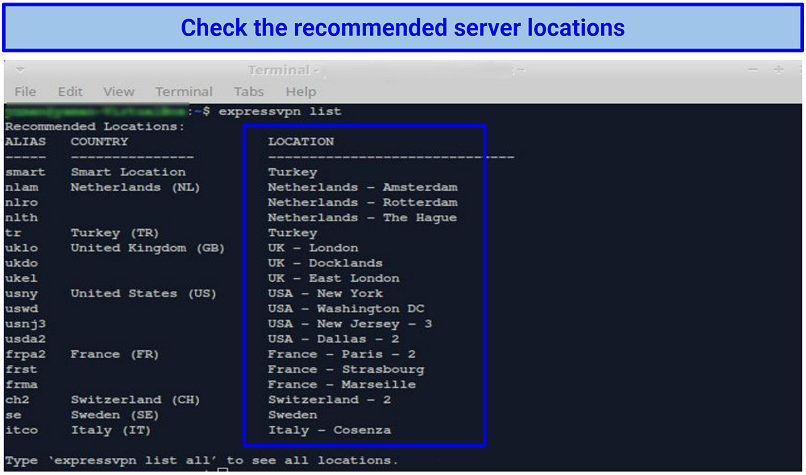 ExpressVPN recommends the best servers for your location

To see all available locations, enter the command:

To connect to a specific server location, type the command:

For example, to connect to the London server, enter the command:

Switch to a Different VPN protocol

VPN protocols determine how data is routed between your device and a VPN server. By default, ExpressVPN is set to use the automatic protocol option. However, switching to a different protocol can give you faster connection speeds.

Note: Ensure you have disconnected the VPN before switching to another protocol.

To Switch to Lightway – TCP

To Switch to Lightway – UDP

To Switch to OpenVPN – TCP

To Switch to OpenVPN – UDP

To use the Automatic Option

ExpressVPN Linux app also has a Threat Manager feature that protects you against pesky apps, trackers, and malware. Threat Manager blocks all communications with servers listed as trackers or malicious sites.

To Enable or Disable Threat Manager:

Note: Make sure to connect to the VPN network and use the automatic protocol or Lightway.

To see the full list of the app’s functions, run the following command:

Use the Autocomplete Feature

Use the Auto-Connect Feature

ExpressVPN can be set up to automatically connect to your last used location on a start-up. It’s convenient if you use the same server regularly.

It can be done by entering:

Note: You will see the “Auto-connect is enabled” message.

To disable this feature, run the command:

Updating the ExpressVPN app on Linux is very easy. When an update is available for downloading, you will see the message “a new version is available” in the terminal. Follow the link attached in the notification to update the app.

You can also manually check if your app is using the latest version. Here’s how to update ExpressVPN on Linux:

Step 3: Use the ExpressVPN for Linux download page to get the latest installer file compatible with your distro.

Step 4: Install the newest version of the app.

Finally, if you don’t want to keep on using ExpressVPN, follow the process below to uninstall the app:

Use Linux Safely with ExpressVPN

FAQs on Installing ExpressVPN for Linux

Is using ExpressVPN with Linux safe?

Yes, using ExpressVPN with Linux is safe. It’s recommended to use a VPN to keep your online activity protected from hackers and snoops. You can install ExpressVPN Linux apps easily by following the guide. The VPN comes with military-grade encryption, a Network Lock (kill switch), and split tunneling to safeguard your data. Plus, Perfect Forward Secrecy constantly changes your encryption key, so no one can intercept your private information.

Does ExpressVPN work with all Linux distros?

Note: If your distro isn’t listed above or isn’t based on any of these distributions, you can still set up ExpressVPN following the guide. However, ExpressVPN doesn’t officially support them, so you can’t get help from technical support in case of any issues.

Does Ubuntu have a built-in VPN?

No, Ubuntu doesn’t have a built-in VPN. However, it offers a Network Manager — an excellent GUI to configure your network settings. It helps manage your VPN connections. You can also use ExpressVPN on Ubuntu by connecting to a server using the terminal.

If I use ExpressVPN on Linux, will it affect my connection speed?

Yes, all VPNs decrease your connection speed. However, ExpressVPN is lightning-fast and doesn’t noticeably reduce your base speed. Plus, you can use the Lightway protocol for even faster connections.

What should I do if I am experiencing issues with my app?

Can I use a free VPN instead of ExpressVPN on Linux?

You can, but you’d be putting your online privacy at risk. Free VPNs lack advanced security features. Some have even been caught selling user data and embedding malware into their apps. It’s safer to use ExpressVPN with its robust security features and a money-back guarantee. Plus, it’s compatible with many Linux distros.

Most free VPNs don’t support Linux. Even if you find one that works with Linux, it most likely limits your connection speeds and server locations. Free services also bombard you with annoying ads, forcing you to upgrade to their paid plans.

Installing ExpressVPN on Linux is easy if you know the right steps. Just download the ExpressVPN installer and subscribe to a plan before setting it up on Linux. You can use the GUI or terminal commands to install the VPN.

ExpressVPN is my top choice to use Linux securely. It offers high-end privacy and security features so hackers can’t intercept your sensitive information. The vast server network and blazing-fast speeds are great for accessing the content you need and streaming without interruptions. You can try ExpressVPN risk-free, too, as it’s backed by a 30-day money-back guarantee. Getting a refund is hassle-free if the VPN isn’t right for you.

Your data is exposed to the websites you visit!

The information above can be used to track you, target you for ads, and monitor what you do online.

VPNs can help you hide this information from websites so that you are protected at all times. We recommend ExpressVPN — the #1 VPN out of over 350 providers we’ve tested. It has military-grade encryption and privacy features that will ensure your digital security, plus — it’s currently offering 49% off.